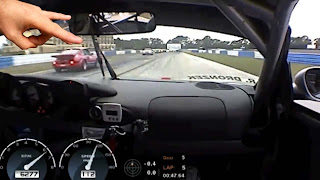 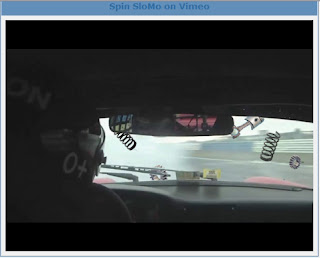 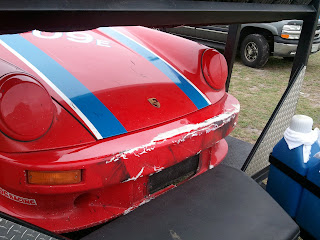 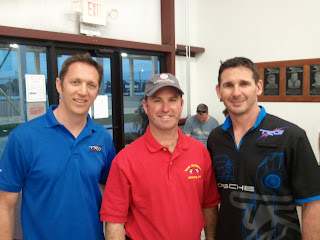 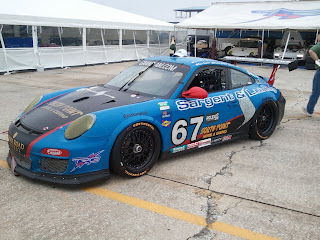 What a week! Sebring was a very cool experience. Quite a few pro teams were there getting an extra few test days in advance of the AMLS winter test days. The TRG guys brought their Daytona winning car to display. They hadn't even washed it.
As for the racing, I spent a very frustrating few days trying to get on track for some practice before I was to co-drive my friend Scott's car in the Sunday enduro. Alas, my total practice time amounted to parade laps and a 30 minute practice Sunday morning. As you'll see in a bit, 30 minutes is just not enough practice for Sebring. I did get lucky during one of the parade laps because I ended up following Shane Lewis (winner of the Nurburgring 24 for Audi). Following him, even slowly, was great to learn the line. Unfortunately I was driving my friends Navigator full of junk including tool boxes that kept opening and closing and stuff was flying around.
On to the action. After spending a lot of time cajoling Scott into letting me start the car I was all set to race at Sebring. If you've never been there, the start is a little crazy but I really wanted to do it. The track going into turn 1 is very wide. So wide you can go about 10 wide. It very quickly closes down going into turn two to 4 wide then 2 wide. It's a hoot.
A side note, one of the guys that helped me convince Scott to start the car was a guy named Charlie Murphy. Charlie runs Intersport. When the poop hits the rotary oscillator, you want Charlie there. You want to talk to Charlie before you do anything else. He's like having an attorney only much better because he can fix your car too. He's been around a long time and has some terrific stories.
Back to the action. I survived turn 1 and things were going OK. I wasn't setting the world on fire since I was still learning the track. Not too bad, the car felt good. The track is horribly bumpy. I'm not sure why they don't fix it as it's just plain dangerous. It's so bumpy it's actually scary because you have no choice but to go over the bumps and hang on. You have to trust the car because you are getting knocked around pretty severely in there. With Lap 1 under my belt I was feeling pretty good. Then, under braking into the hairpin, I hit a bump and the car spun like a top. It happened really fast. Really really fast. My hands were quick but my feet were slow. I couldn't save it. It's OK because it's not my car! Joke! Even more unfortunate, a Boxster trying to avoid me the best he could ran across my nose so I messed up his day too. It could have been worse as a wall of cars was coming at me as I faced the wrong way on the track.
After much investigation, it seems that the culprit was a fairly good bump on the track. With a little more experience on that track I probably wouldn't have been braking there. I also wrestle with whether or not going both feet in was the right thing to do or if I should have gotten off the brake to settle the rear and try to ride it out and blow the turn. There is plenty of track down there to miss the turn but maybe trying to catch it would have started a tank slapper and ended worse. Live and learn.
Enjoy the pictures my "friends" made!
Here's the video:
http://www.vimeo.com/19730305
http://www.vimeo.com/19730521
Posted by Hunt McMahon at 6:31 PM