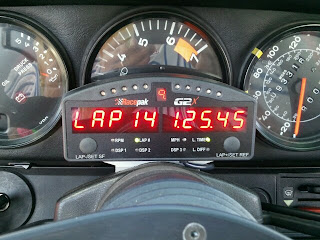 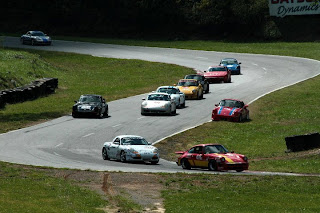 WAAAAHOOOO! What a weekend! Picked the car up Thursday afternoon from Performance Auto Works. I was a little concerned about blowing up my freshly rebuilt and paid for engine so Billy told me to take it easy in Friday morning's practice and check for leaks or parts falling off. All I can say is that there was not a drop of oil coming out of that engine by Friday afternoon and it ran beautifully all weekend. I can't say enough about Billy and the guys getting the engine rebuilt on time and on budget and not a hiccup in what turned out to be my best weekend of racing yet.
Saturday was outstanding. Sprint one went my way early as Scott and Bella crashed out of turn one Nad John missed a shift leaving 2nd place mine to lose. Drove hard with John and Evan and ended up 2nd.
Sprint 2 was epic. I got a good start and got past John and chased Sean for two or three laps when all of a sudden two Spec Boxsters spun out in turn 1. Sean was closer to the spin and had to almost come to a stop. I took that opportunity to squeak past him and then kept him and John behind for the next million laps. I thought that race was 25 minutes but it turned out to be 35 minutes. I've never wanted to see a checker so badly in my life. Sean and John were literally on my bumper for 20 laps. It was a tremendous amount of work keeping them there. I planned my one move the best I could. I tried to rob them of their momentum and get back on the gas sooner. I tried using lapped traffic as a pick. At one point we came through turn 1 3 wide and I still do not know how I squirted out in front of them. I was getting really tired and on the last corner of the last lap I slid a little wide in turn 10 and had to lift just enough for Sean to get beside me and beat me to the checker by about 2 feet. On the cool down the corner workers were all waving and giving me some very enthusiastic thumbs up. It must have been pretty entertaining to watch. I ended up finishing 3rd in class.
Saturday night was really great as my wife and daughter came to the awards dinner and I was able to go get my 2nd and 3rd place trophies.
Best of all, the corner workers awarded me the "Worker's Choice" award for my crazy drive in the second sprint. I guess they did have a lot of fun watching the battle. Getting a Worker's Choice is something very special to us amateurs.
Sunday was another great day. I scored two 4th place finishes in the sprint and the 90 minute enduro. Better yet was the near perfect conditions for our old air cooled cars. I saw my personal best time of a 1:25.449. I still have a lot of work to do in order to see a consistent 1:25 but I'm getting closer.
Lots of good racing this weekend with John, Sean, Evan and the rest of the NE PCA'ers who came down to play at our little track in WV.
Here is a compilation of the starts and a few laps of each race:
PCA Summit Point Starts
Posted by Hunt McMahon at 7:34 PM