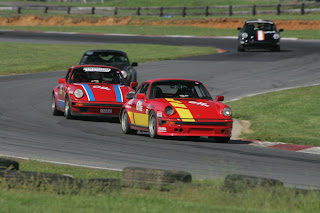 Just finished watching the Conti Tire Challenge! I don't know if I can wait another 4 weeks to get on the track.
Alas, it gives me time to acquire my new shocks. I've decided to go with the Koni race shocks in the front and the sports at the rear after a very nice guy at Koni reviewed my set up. The big advantage to the Konis is they are off the shelf. No time and $$$ lost re-valving!
Billy at Performance Autoworks at Summit Point may have a rear torsion bar which would be great.
So I'll end up with a 23mm/31mm setup that should be pretty solid on the new shocks.
I will probably go with the Smart Racing Sway bar (available at OGracing.com) since the bars can be switched out later if needed. I have 2 recommendations on that, either go with a 27mm/24mm or go all the way and get a 31mm/27mm.
I did go to OG Racing in Sterling last week and purchased a new balaclava and some SRF brake fluid. From everything I've been told or read this is supposed to be the best brake fluid out there. Less bleeding would be great! Less fade would be great! Pretty pricey stuff though.
I also had my eye on the new AIM MyTach GPS Data Training Watch. It looks neato! I'm afraid I'll crash looking at my watch though :) There is an included dash mount.
I did walk out with a very nice Sparco jacket with the WRC logo and a zip out lining. I almost want winter to come back again. Ha!
I'll spend tomorrow organizing my new garage area and getting my new tool situation ironed out. That is unless the wife has other plans!
Posted by Hunt McMahon at 4:43 PM